Struggling with your mental wellbeing? Stuck in an ever-swirling washing-machine head? Can’t find your way out of the maze?

Rewriting Your Script is a transformative, creative writing programme, offering  you innovative and effective analytical tools to improve your mental wellbeing.

tutor Chris Jury, to develop a proposal for a short film or short play. This  creative process gives you the emotional distance to safely explore and test some of the ideas, assumptions and expectations that underpin your mental wellbeing.

Rewriting Your Script is an opportunity to learn a new creative skill that will also improve your mental wellbeing by providing new tools to facilitate self-reflection leading to self-knowledge and thus to more informed and positive responses to thoughts, feelings and stimuli.

how it works we are also recognising the similarities with more formal therapies. See here for more information.

“I can not thank Chris enough for what he has done. He is committed to the program

and genuinely wants to make a difference. In the workshop he was open about his own experiences which enabled him to quickly build a rapport with the participants and gain trust. His extensive knowledge of screenwriting and the industry as well as his witty sense of humour made the lectures so lively and interesting. I dare say that I wasn’t the only one who could hardly wait a whole week for our next session. The biggest breakthrough for me is that the story telling and analysing process helped me understand the myths of my thinking and beliefs. Hence I now can look at issues in my life from a new perspective. This workshop is valuable in so many ways!”

The programme started at Weymouth Library, Great George Street, Weymouth, DT4 8NN View Map, on Monday 23rd and Tuesday 24th September and runs from 10.00-13.00 every Monday and Tuesday for 12 weeks.

“Amazing learning and the main tutor is fantastic! Lots to discuss and think about. Thank you so much!”

All of us tell stories about ourselves; about the experiences that have shaped

us, the trials and turning points that have tested us. These defining stories we tell about ourselves help make sense of our lives, justify our actions and give our relationships meaning. Yet at times we can be given or create for ourselves life-stories that turn out to be misleading, unhelpful or even self-destructive.

Using the techniques of story telling to explore, understand and reimagine your life-problems can transform your sense of self-worth, change your relationship with others and provide you with a more positive vision of your future.

But Rewriting Your Script only uses scriptwriting rather than memoirs, novels or 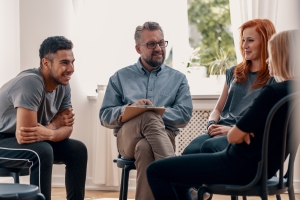 Because memoirs, novels and short stories are told to us by a ‘reliable narrator’. When the narrator describes the emotions and motives of a character we readers have to believe the narrator because the narrator is the only source of information available to us.

In real life of course we do not have a reliable narrator accurately describing to us the emotions and motivations of ourselves and the people we interact with. On the contrary the ‘narration’ of our lived lives is often highly unreliable because it is created by our own insecure, ego-driven, self and we often 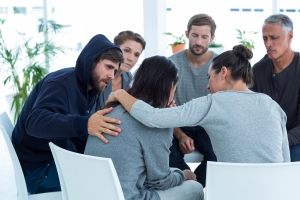 unintentionally construct narratives about our lives that are inaccurate, unhelpful and sometimes even self-destructive.

Scripts are much more like real-life because the audience can only make sense of the drama by observing how and what people say and do. Thus reframing our actions and our experience in script form and seeing them through an audiences eyes, can give us new insights into our situation and new ways of thinking about solutions. 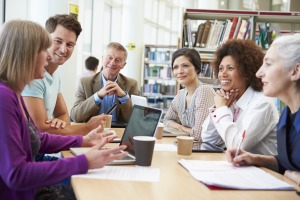 Leamington Town Council Community Fund, ran in Leamington Spa in January 2019 for 8 weeks. Here are some comments of the users who took part in this pilot:

“Rewriting Your Script is a format that really worked for me. The approach of using script writing opens up a different form of writing to what I am used to. The discursive nature of the programme – both in questioning and understanding the script writing process and in reviewing my own script based on my issues, is essential and is quite non-confrontational, with not only invaluable input from Chris but from the other participants in the programme.  I really think that this programme has helped me focus on the root cause of my mental health issues, and provided a path on what direction I can take to overcome them.”

“I didn’t know what to expect from my first session but very quickly found it to be a very safe, supporting space. I felt free to express myself and be brave, and quite quickly felt I belonged. The story and character building was insightful and very easy to apply to my own circumstances. I didn’t want the course to end. Would highly recommend to everyone” 🙂

“I found the programme to be insightful and engaging. Something unique and rewarding. A way to learn new skills and use them to better understand my mental health.”

“I came across this workshop by chance when my life was completely turned upside down. In a sense the course saved my sanity because it gave me a platform to release the negative thoughts and feelings that were troubling me so much. In the workshop from Chris to Steve to every attendee, every one was so supportive, genuine and open. We felt safe to talk about our problems because we knew we would not be judged. It was also great fun listening to Chris. His lectures were full of insights and information, never boring. As a matter of fact, I can’t remember there was ever one afternoon that we could finish our discussion within three hours. Chris and Steve always prolonged the workshop for as long as we wanted. I sincerely hope that there will be more of such workshops so that more people with mental health issues can benefit from them.”

“I think the therapeutic value of these sessions is huge. Chris and Steve are so passionate, engaging and knowledgeable and the attention and guidance they are giving to each member of the group has the potential to be very healing. It’s fulfilling and stimulating on both an intellectual and emotional level and it’s been lovely to see how engaged service users have been and how supportive the group feels.”

Rewriting Your Script is an adaptable programme that can be of benefit to users in a range of circumstances including those suffering a generalised lack of mental well-being and those suffering from diagnosed mental health conditions, but also disadvantaged groups such as the homeless, the unemployed, military veterans, senior citizens and even those undergoing rapid change in corporate environments.

We are keen to work with a wide range of delivery partners so please contact us if you would like to find out more.

Rewriting Your Script has been devised by mental health service users and creative writers Steve Norton and Chris Jury.

Steve Norton has recently graduated from the Writing For Performance course at Ruskin College, Oxford. Steve came to creative writing through the homelessness charity Crisis after a mental breakdown in 2014. Steve had the idea for What’s Your Story? after studying with Chris Jury in Autumn 2017.

“Emotions have meaning. We should try to understand their messages. They are usually trying to get us to do or stop doing something.”

Chris Jury is an award winning actor writer and director best known for playing Eric Catchpole in over 50 episodes of BBC antique classic, Lovejoy. He has also written and directed on television shows such as The Bill, Holby City, Casualty, Eastenders and Coronation Street. He has lectured on scriptwriting and Film & TV production at the University Of West London, Leeds Metropolitan University and Bath Spa University. Chris has suffered from severe depression and been in recovery for 23 years. He is currently writing for television and through his company ScreenWrite, he runs affordable training courses for writers of film and television drama.